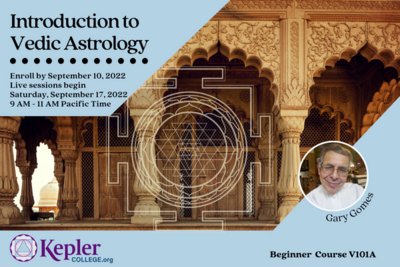 This course is Part One of an introduction to the wide tapestry of the astrology of India, commonly known as Jyotisha (the spirit or science of light). Also known as “Vedic Astrology,” because of its connection to Indian spiritual beliefs found in the Vedas, the primary holy books of the Sanatana Dharma (eternal law), also known as Hinduism.

Indian Astrology is a uniquely unbroken tradition of astrology, practiced continuously for as long as 2,000 years according to modern scholarship. In Indian, the tradition is viewed as extending back at least 5,000 years. It is referenced in the religious writing of India as far back as the Maha Bharata and the Atharva Veda, two ancient spiritual texts.
In addition to its spiritual origins, the Astrologies of India are renowned for several distinct differences from the Western traditions: First, its emphasis is on prediction, so the Indian astrological system can function as a very strong predictive and analytical tool. It also uses special techniques that seem to have originated solely in India—the use of the lunar nodes, major planetary periods, etc. which are very useful in assessing when events will occur. And include an extensive collection of remedies which are often used to allay bad planetary effects. Finally, it consistently uses tools that are only infrequently used in other forms of astrology, such as a whole system of harmonic charts that cover certain specific parts of life; Nakshatras (or one a day lunar mansions, which map out destiny) and, of course the sidereal zodiac, which is used in lieu of the tropical zodiac common to most non-Indian astrology systems.
The course will cover
An overview of how to use the system of Indian Astrology will include:
By the end of the class, the student will be able to provide a basic chart interpretation using standard analytical techniques of an Indian chart.